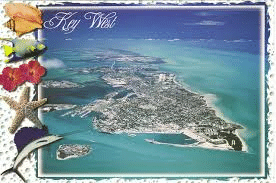 Upon return of a friends visit from Key West he asked me about Thompson’s Island to which I responded “Where’s that?”. He then replied “That’s the prior name of Key West”. Since he shares the same last name as the former island I asked “Does that make it your island now?” as in staking a claim.

I actually found it quite intriguing and said “I see a future blog coming out of this!” That future is now… thanks J. Thompson!

Here’s the scoop on the establishment of Thompson’s Island now called Key West: On March 25, 1822, Lt. Commander, Matthew Perry, sailed the schooner Shark to Key West and planted the U.S. flag, claiming the Keys as United States property. No protests were made over the American claim so Perry renamed Cayo Hueso (Key West) to “Thompson’s Island” for Secretary of the Navy Smith Thompson. Luckily for us the name never stuck. There you have it, knowing more about Key West’s prior name than you ever wanted to know.

Wow, seeing the postcard below, it’s hard to fathom that they almost said ‘Greetings From Thompson’s Island Florida, Southernmost City In The USA’. Hmmm, I like Key West better!