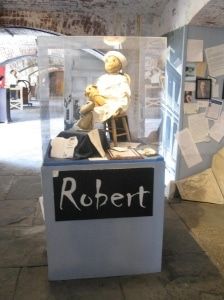 Here’s a famous local Ghost Tale for you! Robert the Doll was once owned by Key West painter Robert Eugene Otto. The doll allegedly cursed has become a fixture of local ghost tours and featured on TV’s Travel Channel for America’s Most Haunted.

Eugene was given the doll in 1904 by a servant who was skilled in black magic & voodoo. Soon afterwards it became clear that there was something eerie about the doll. Eugene’s parents often heard him talking to the doll and the doll appeared to be talking back. Although at first they assumed that Eugene was simply answering himself in a changed voice, they later believed that the doll was actually speaking. Neighbors claimed to see the doll moving from window to window when the family was out. The Otto family swore that sometimes the doll would emit a terrifying giggle and that they caught glimpses of it running from room to room. In the night Eugene would scream, and when his parents ran to the room they would find furniture knocked over and Eugene in bed, looking incredibly scared, telling them that “Robert did it!”.When Eugene died in 1972, the doll was left in the attic until the house was bought again. The new family’s ten-year old girl became Robert’s new owner. It was not long before the girl began screaming out in the night, claiming that Robert moved about the room and even attack her.

The doll made an appearance at a paranormal convention in Clearwater, Florida in 2008 making it the first time ever leaving Key West in 105 years. Be aware and heed this warning: If you wish to take a picture of him, you must ask Robert politely or the doll will curse you and your family. Along with the doll, you will find letters written to him including one from former President George Bush. The 1988 American slasher movie Child’s Play, was inspired by Robert the Doll. (True, look it up!)

You can find Robert The Doll at the East Martello Tower Museum in Key West on the southeast portion of town for a $6 fee.