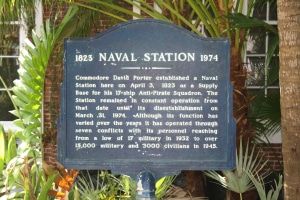 Key West has long since had a military presence with its current emphasis on Air Force. In the past, the Navy was the overwhelming Big Brother of the Keys with an astounding amount of personnel in the area.

Welcome to the former Naval Station that ruled this island for some 156 years. Here’s how it played out: Commodore David Porter established a Naval Station here on April 3rd 1823 as a Supply Base for his 17-ship Anti-Pirate Squadron. The Station remained in constant operation from that date to its disestablishment on March 31st, 1974. Although its function has varied over the years it has operated through multiple conflicts including: Anti-piracy Campaign, Seminole Indian War, Civil War, Spanish-American War, World War I, World War II, Cuban Missile Crisis, and the Cold War [See the Florida Key’s Military Memorial]. Since its inception, the Navel Stations personnel reached an all time low of ONLY 17 in 1932 to over 18,000 during WWII in 1945. Just think, todays entire island population is approximately 26,000… back then, the military outnumbered the LOCALS! Let me see, that’s about 45 servicemen to every available woman in Key West at that time! A females smorgasbord for sure!

You can find this Historical Naval Station marker… if you look really good… at the corner of Front Street & Caroline Street here in Key West. I’ll make this easier, first find the attraction known as the ‘Harry S. Truman Little White House’, from the road look for a large circular water fountain near a six-foot tall wrought iron gate… over there, you see it!