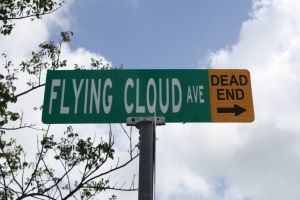 Flying Cloud… What Is It?

Sticking out like a sore thumb among other street names is what appears at first glance to be nothing more than an American Indian reference.     You would be so wrong!

Being an incredible WWII and history buff I seized the opportunity to pass along a little bit of our nations great fighting past during trying times. The name ‘Flying Cloud’ is indeed American Indian related in this instance correlated with a Navy vessel of great stature. With the outbreak of WWII, the U.S. Navy after the attack of Pearl Harbor was in dire need for ships of all sizes acquired the ‘Flying Cloud’ and commissioned her into service as the USS Jupiter. (seen below)

She also procured 7 more battle stars for the Korean War.

How do I know this street name was meant directly for this particular Navy ship, It’s located on Ships Row! You can find the proud ‘Flying Cloud’ wedged in-between other better known vessels such as ‘Enterprise’ & ‘Saratoga’ at Mile Marker 29.7 bayside Big Pine Key.