Dr. Martin Luther King Jr. “I Have A Dream!” Speech 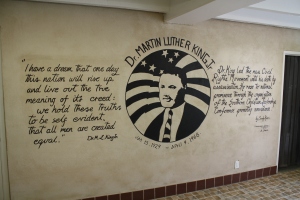 King lived from Jan. 15th, 1929 to April 4th, 1968 when he was assassinated by James Earl Ray in Memphis, Tennessee as he stood on the balcony of the Lorraine Motel. He gave his famous speech on August 28, 1963, in which he called for an end to racism in the United States. Delivered to over 250,000 civil rights supporters from the steps of the Lincoln Memorial during the March on Washington for Jobs and Freedom, the speech was a defining moment of the American Civil Rights Movement. The most famous portion was this: “I have a dream that one day this nation will rise up and live out the true meaning of its creed: we hold these truths to be self-evident, that all men are created equal.”

That memorable portion of his speech I found painted on a hallway wall as we made our way to an upstairs public swimming pool. Also on the same wall is this: Dr. King led the mass civil rights movement until his death by assassination. He rose to national prominence through the organization of the Southern Christian Leadership Conference promoting non-violence.

You can find this famous “I Have A Dream” speech at the Martin Luther King Jr. swimming complex at the corner of Thomas Street & Catherine Street next to the Willie Ward Park. While in Key West don’t ever be squeamish about going a few blocks out of your comfort zone, you too might find a hidden gem as we did.

PS – If you look real close in the bottom right hand corner of commissioners you’ll find my families name! (You’ll have to guess at which one is mine!)