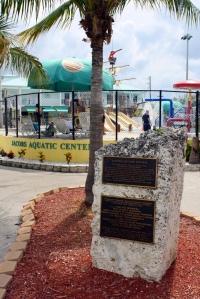 Driving through Key Largo and looking deeper for new blog ideas I saw a sign for an Aquatic Park that spurred my curiosity for being in a relatively small town. I drove down 2 blocks and parked my car walking upon this marker.  Wow, was I surprised to find out the circumstance of this water park.

The Jacobs Aquatic Center is named after the Barbara Jacobs Family for their sincere generosity that made this center possible. Their dedication to our community has enriched the lives of many people. The Barbara Jacobs Family, former owner of the Cleveland Indians Major League Baseball Team (1986-2000), believes very strongly in the sense of community pride and the value of its youth. It is through their commitment and the commitment of others, that the Jacobs Aquatic Center became a reality in June 2002. Way to go Jacobs Family for caring about the lives of our youth to create such a place here in Key Largo. Thank You!

The Cleveland Indians played in Jacobs Field until 2008 named after owners David (died in the 1990’s) & Barbara Jacobs (didn’t died till 2005). Key Largo was not the only recipients to the generosity of the former Cleveland Indians owners. Indiana University received the biggest gift by far in their newly named Jacobs School of Music that will forever assist talented students as they study at Barbara’s alma mater. Are you ready for this, the Indiana University Foundation received Barbara’s gift of $40.6 million to her former school. It’s the largest single gift for a school of music at a public university in history. It’s also the largest single gift ever given by an individual to Indiana University. That’s generosity at its finest!

Though I don’t know Barbara Jacobs ties to Key Largo, I do know this… you can find her generous namesake ‘Jacobs Aquatic Center’ inside of the Key Largo Community Park.